Motion Detectors, a new way to look at it!

We are one of the leading Manufacturers and Importers of Air Curtain Sensors, Magnetic Reed Switches, Occupancy Sensors, Motion Sensors, etc.

1 LEAP Technologies, as the name suggests, we always try to take 1 more LEAP ahead for providing our customers with better Innovative, Cost Effective and Premium Quality products. We are in this business of providing Energy Saving Solutions because of our core value of saving our environment for our future generations to come. We offer products that can save you a considerable amount of electricity every month, thus reducing our carbon foot prints.

Motion Detectors, a new way to look at it!

Many of the clients regularly ask me, we are already using light saving LED bulbs and tubes so why the need for Motion detectors? How much extra can I save, can I even save anything?

These are some very genuine questions asked, if you we are shelling out money for something, then the money spent should serve its purpose.

Conventionally we have been looking at motion detectors as energy saving devices, which is absolutely correct, it does saves energy over and above the energy saving lamps that we are using, but today this is not the topic of our discussion. We all know what it does at the face of it, so todays lets dwell into some other aspects of it. Can it be of any other use to me? Apart from it’s conventional use as an energy saving device. 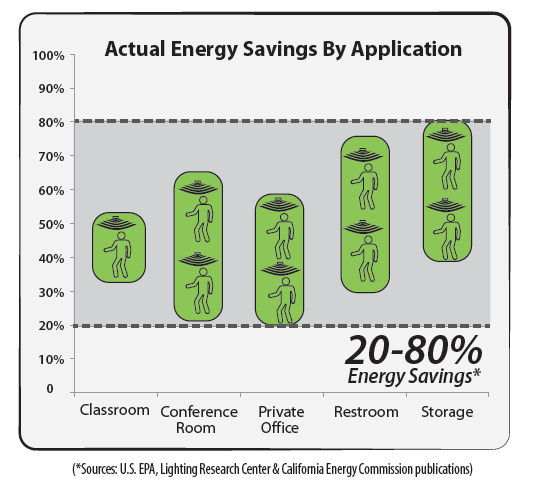 Answer to this question is Yes, in-fact one of the most important feature that comes with this product is normally ignored, and from my point of view this aspect is far more important than its energy saving aspect.

A Motion detector, by its name it self, is self explanatory that it detects motion, this technology is used in such a way that when ever any motion is detected in the range of the sensor the connected load, usually a light turns ON, and remains ON for a certain period of time, which can be manually set on the detector, now this feature of switching ON light really comes handy when this motion is created by some unwanted guests.

Ah.. Ahha.. Unwanted guest, so what’s that now? hmm, something fishy yaa.. Ok so no more guessing, let’s straight away come to the point, today we are going to talk about how a motion detector can come handy dealing with burglars. Yes you read it correctly burglars. Isn’t this a common word, don’t we come across these kinds of news now and then,  we almost regularly hear about a break-in or hear about them in the news, and think to yourself ‘Ah, good thing that would never happen to me…’? Unfortunately, this is probably what those individuals in the news thought at one time as well. ‘Burglaries are so seldom…’ we think, but they are unfortunately more common than we assume.

Considering these figures it is understandable that more and more homeowners should take measures to prevent burglaries in any way that they can.

The simple fact that a house is equipped with some sort of burglary protection can often put off an intruder.

Effective anti-burglary protection consists of multiple elements, one of which especially important is: light –  and not just any light. The best form of light is that which catches the burglar in the act: light, switched on by a motion detectors.

Burglars are looking for houses that are locked so that they can silently perform there task, with out any sort of resistance. So now the big question, how does a motion detector comes to my rescue in such a situation, so apart from cutting down on energy costs and making lighting your home more convenient, they also can provide an excellent protection against break-ins and vandalism. Such lights employ the proven crime fighting psychology used by experts: “The avoidance of confrontation”.

So lets dwell into this a bit more and see some tips for  keeping your home safe from burglars using lights with motion sensors.

The psychology of burglars and how can we protect ourself!

A typical burglar is always on the lookout for the path of least resistance, and this is quite obvious to all of us, why?

Combining this fact, and the aspect that most burglars avoid confrontation as much as possible, we can generally see why an easy-to-access building are easy victims. These buildings are those where it is obvious that no one is home, and which one can approach relatively unnoticed. If these conditions don’t exist in the first place, then the burglar will simply choose a different target.

Therefore, if we don’t want to become one of these “easy targets”, we must make sure that any burglar who tries to sneak in should have a hard time trying anything around our house. Ensuring that there is no possible way to approach our house unseen–  using lights with motion sensors–  and making it difficult for observers to ever tell if we’re really at home or not. This can either be achieved by having the neighbor watch our home, or through intelligent lighting options.

Now a lighting controlled by motion sensor will ensures that all approaching moving objects automatically gets illuminated, as well as the area around them. To do this, motion sensors register moving sources of warmth as they pass through the sensor’s detection range.

Both people and animals, as well as cars will trigger these sensors, which is why installing a light with a motion sensor as a parking aide is common.

The automatic illumination that happens  isn’t only helpful for us, but also for our neighbor’s, suppose in case you are on the other side of the house and aren’t able to see when the light has been switched on.  A quick glance over at the illuminated area is enough to let an observer know if you are coming home from running errands– or if a burglar is at work on your locked door.

Therefore, it is not only important to install a light with motion sensors near the main entry, but also near any side or back doors, or narrow passage ways near home. Such side entryways are often forgotten when it comes to illumination, and therefore preferred by burglars.

For anyone who is  trying to get into our house, the wrong way, and at the wrong time, however expert he may be at his job, but if out of no where he gets illuminated by a focused light is sure to get shocked and frightened, and this shock is enough to make him change his mind.

We all know 100%-sure protection naturally doesn’t exist, but a first-class illumination of our property can definitely offer a high level of protection, as burglars are frightened off by a light switching on seemingly out of nowhere – making it clear that our home will by no means be their next target.

So from now don’t just look at motion detectors as just energy saving devices, they are more than that, in-fact much more, ask someone who’s house got saved from burglary by installing these simple yet effective device.

How effective can this be for you? do share your valuable comments.

Your email address will not be published. Required fields are marked *